…I can open this website again. My connection here is pretty slow and I don’t always succeed. Things have happened in the mean time. 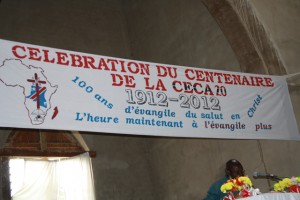 CENTENARY
This year CECA 20, the church in Congo that was started by AIM, celebrates its 100-year existence. It was in 1912 that AIM missionaries entered the Congo with the Good News of Jesus Christ. In all the church districts celebration services were held earlier this year and now in all the church sections as well. The last weekend of September the church section of Adi celebrated CECA’s 100 year. Saturday morning we had a big church service (with as theme to build the future for our families, our church and our country) followed in the afternoon by a march to Ingbokolo and evangelism. Sunday the big celebration service started with the trumpets playing the ‘Halleluiah’ chorus. During the service the history of CECA in Adi was told and confirmed by a 108 year old man. In all those years God has shown Himself faithful. 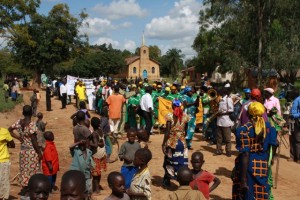 In Adi preparing for the march to Ingbokolo 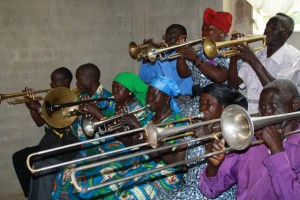 The trumpets playing the ‘Halleluya’ chorus 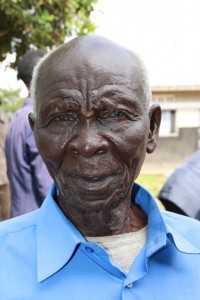 GODRIA
On 6 October Likambo, one of my colleagues of the AIDS Awareness Program, and I visited Godria. In 2009 we organized a week long workshop there of Participatory Integrated Community Development. Realizing their problems and their ressources the people in the community opted to have a primary school at the center of the village for the children to have easy access to school. Otherwise they had to cross a river that could be dangerous for the younger children in the rainy season. 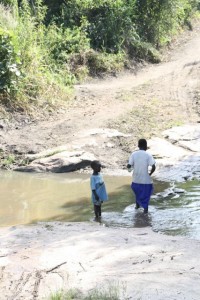 The river in dry season

The school started in 2010 and is now a school with all six classes of primary level, with 155 children of whom 55% are girls.
Likambo and I were received by the children with a march, several skits and speeches. It was good to see everything and hear about the school. By the way, the school is called ‘Annemarie’ and of course now they expect things from me as well. However, development is not by having things done for them although I am willing to investigate how to go about the school getting recognition by the government, where books are available for the school and lobby for a clean water source closer to the school. 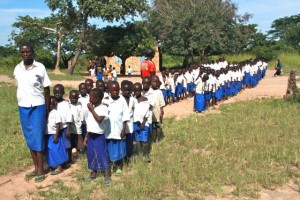 March in Godria of the pupils of primary school ‘Annemarie’ 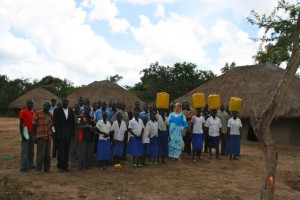 In the schoolyard with the parents committee

SECURITY
This month Adi has known security problems after 10 armed men robbed the medical director of Adi hospital at gunpoint. Two other robberies took place after that and Thursday the population of Ingbokolo (which is only 3 kilometers from Adi) took on a protest march against the police, who knew some of the culprits and had let one go free. It escalated when the police started shooting and three persons were wounded. However, Friday reinforments came and they are investigating the whole issue now. Calm is slowly returning but we need your prayers for safety. I have not felt threatened, although I mainly stayed home. God is with my and I am in his hands.