Working on films
Since Laura is here we have been working on the production of a film that will document the work of the AIDS Awareness Program. When Laura came, she could jump straight in the deep end because only four days after her arrival it was World AIDS Day and she could film how we went for sensitization at several schools in Ingbokolo. 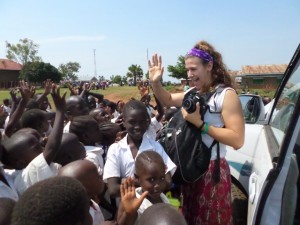 So we got to it all in a relaxed way. There are three main videos now that we are thinking about. The top one of these is a video about the AIDS Awareness Program. How did it start, how did it develop, where are we now and how do we look at the future. We have already done one interview, with Dr. Aimé, who is the medical head of staff and also responsible for the treatment program. He did very well. In the mean time Laura has been able to film and we want to put these little clips in front of the speeches. 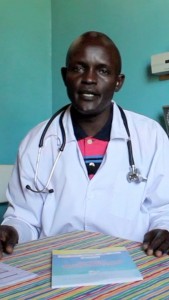 Dr. Aimé during his interview

The second one is about my life in Adi, so, this is a more personal one and really the least important for I am visible in the one for the AIDS Program as well.

The third one is an idea of Bhayo, one of my colleagues. He works a lot with young people and observes the problems with marriage. Many young people don’t marry the biblical way but a boy just grasps a girl, takes her home and she is his ‘wife’ from that moment on. Often she is already pregnant when he takes her home. During the prenatal clinics that we attended I have seen some girls of 15 and 16 years of age that came to those clinics with their first pregnancy. We pray that this video, which will show the biblical marriage in contrast with the marriage by abduction, will have an impact on the young people who watch it. Here too we will have a pastor (Bhayo) give a short sermon and show what he says in short video clips.

December and January are also the times for church conferences. During the Christmas break a three day conference was organized for the young people of Adi and CECA churches in the neighborhood. Margaret and I have been talking about AIDS and made a call for the youth to be tested. This week there will be a general church conference and also here we have been given time to share about AIDS. The main theme for this conference is “God’s Plan” and we want to talk about God’s Plan for the church in relationship with HIV and AIDS. 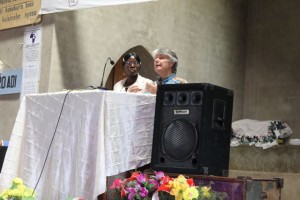 Margaret and I during the youth conference