19 October I could step on the plane to Entebbe in Uganda. You made it possible for me through your voluntary gifts and promises for my support. A big thanks to all of you.

I have spent three weeks in Uganda in which I have been given a multiple entry visa for Uganda. This makes it much easier and cheaper for me than having to pay $50 for each time I want to enter Uganda. I also have had several talks with the leadership of AIM there. The most important issue of discussion was the new framework of AIM, which focuses more on reaching the unreached and teaching church leaders. Medical work and administration fall outside of the new framework and my ministry will change. And that is exactly what I want. No more administration but to be more involved in the training of church leaders about AIDS and involvement in the treatment program in the hospital.

Around the time that I was expecting my visa, I received a telephone call from Dr. Claude, one of the doctors and medical director of Adi Hospital. He and a pastor from Ingbokolo (who speaks good English) were in Kampala to buy a car for the hospital. They were hoping that I could travel back with them. The visa took longer however, as did the buying and getting ready of the car. We could leave from Kampala on Saturday afternoon November 8. In Kampala a driver from Uganda helped us, but outside of Kampala I took over the steering wheel. It was for me the first time to drive an automat, to be driving on the highway in Uganda (drive left) and with the steering wheel for the Dutch on the wrong side. Everything went well, in spite of the bad road sometimes. We stayed overnight in Pakwach and arrived in Adi on Sunday afternoon.

That week was busy straight away. Tuesday evening the delegates for the Executive Council of CECA arrived in Adi. Kokole Idring’i, our church president, and Toni Stenger, missionary working with CECA in Bunia, came to stay with me. While the council went on, I prepared my plans for the coming term and also the talk with Toni, with whom I would talk it through. Saturday I went with Claude to Arua to get the AIM leader of Central Region. Phil Byler would be sharing the meditations during the General Assembly. 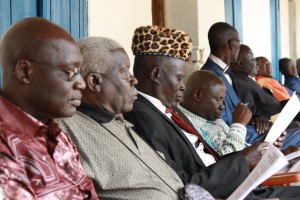 Usually the delegates are divided to attend church services, and also preach, at surrounding churches of CECA. Now they were also sent further away. I was supposed to go to one of the services in Ingbokolo, but had to cancel my visit. One of the doctors who helped train our staff in January was in Adi since Saturday and wanted to talk with all people who followed the training and who were available to come. So I had to be there on Sunday morning. It was a good meeting however, in which I learned a lot how the treatment program was going on and what needed improvement. Monday was the start of the General Assembly and I attended as a member of the assembly. Three-and-a-half days we talked about important issues in CECA, also in smaller groups. I was blessed with another visitor, Thorsten from DIGUNA-Aru. A house full, but fun. Thorsten and Phil already left on Wednesday afternoon. Kokole left Thursday afternoon. Toni stayed and with her I discussed my plans that I now have to discuss with the hospital people. This didn’t take place yet because of other things that need to be done. The hospital has had several visitors, had to prepare meetings and also one important visit (that is going on right now).

I have been busy writing a message for World AIDS Day that was read on Sunday in the surrounding local CECA churches (I have read it in Adi).

Also I did go to Arua again last week (November 26) with the car, this time with Dr. Claude and David (the hospital administrator) to get Laura Hickman. Laura is an American short-term missionary who will be in Adi for three months to help the AIDS Program with the production of a documentary about the program that will picture what we do. We have other ideas as well for other short videos. 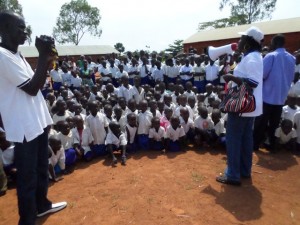 At one of the schools during World AIDS Day.

Laura started filming on Sunday when I read the World AIDS Day message and yesterday we organized, together with others involved in the fight against AIDS, a motorized caravan and we visited several schools to give a short message about the importance of being tested. We gave the same message at the market and the parking place where trucks leave for Arua or Ariwara. There were a lot of people listening everywhere, and we have reached more than 5000 people. I even heard that first graders understood the message. The daughter of Dr. Simon told the whole lesson to her mom. On the way to the Bible Institute in Adi, where we also wanted to go, we met with the important visitors of the hospital.

These important visitors came all the way from Kinshasa to evaluate the treatment program of people living with AIDS in the health zone of Adi. The doctors from Adi had asked me as a partner to be in the meeting. There the visitors explained what they really wanted and how. One of them is connected to an organization that is thinking to support the treatment program (YES, then we will no longer have a problem with shortage of ARV or tests). In the afternoon they went to visit some health centers, and I left for Ingbokolo to help Likambo and two people living with AIDS with the radio broadcast. They had started already and I could jump in. I could tell something as well and my story confirmed the story of the others, without me having heard all that was said.

So yesterday was a busy day. And another busy day will follow with the Kinshasa delegation still here. In how much I will be involved I do not know. One of them has mentioned already that he wanted to talk with me.

Please pray with me that the treatment program will be funded? I will be involved as a consultant to help the hospital team. Pray that we will continue to work together well and that we will learn from each other?

Please pray for wisdom how to fill in my ministry to inform church leaders about AIDS through workshops?

Thank you very much.

16 december 2014: The visiting team from Kinshase said before they left Adi that the health zone of Adi would be one of the health zones that would receive support for the treatment program. Thank You Heavenly Father!