Yes, today I kept a Dutch custom. I baked ‘oliebollen’ and they are delicious. My workers and a friend took a lot of interest in the end result. 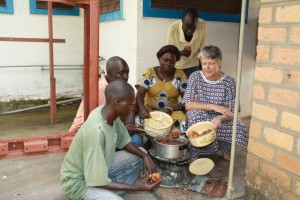 There was much interest for the end result from my workers and a friend.

Although a bit late, I want to wish all my readers a Merry Christmas and Gods blessings for 2013.

My Christmas went well. I started the day with a very early church service on Adi Rock, a nice breakfast and then a church service (in church) followed by a meal together with all members of the church. 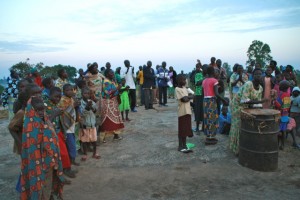 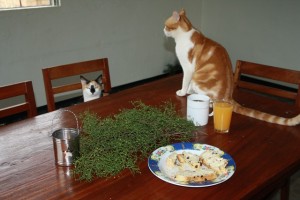 Yesterday was a busy day. The nursing school had twelve students this year that passed their final exams in September and graduation day was yesterday. I was invited and it was a great joy to see these twelve new nurses (male and female) enjoy the happenings.

Before the meal however, I heard sad news. One of the children of one of the workers on the mission station had died suddenly after a very short illness. He started this morning, after drinking a cup of tea with his dad, to vomit and had diarrhea. He died shortly after these signs started. He was only six years old. So a day of joy ended with the burial of this boy, called Emmanuel.

Ingbokolo and Adi are calm again. People have returned home. Still we need your prayers for security to return to the country of DR Congo.

Yesterday evening shooting erupted in Ingbokolo (about 3 km from Adi) with four people dead. Many people have fled Ingbokolo. We don’t know what happened to trigger it or what will happen. Please pray for peace to return.

Wow. I am glad to be back in Adi after having been in Bunia for almost two weeks. I left Adi November 19 with the delegation of the Adi Church District for the General Assembly and we arrived in Bunia very early Wednesday morning (2am) in Bunia. It was only that morning that we heard the news of the take-over of Goma by the rebels of the M23 and the unrest that had reigned in Bunia on Tuesday. The unrest, with a lot of shooting and looting continued again on Wednesday and we were in the middle of it. It was scary sometimes, but I must testify that God has protected us!!!

Thursday however, Bunia was back to normal and the celebrations of the Centenary started. At first I was a bit reluctant to go, but I am glad that I did because praising and worshiping God took my thoughts away from the unrest of Wednesday, away from the unrest in my heart and helped me to focus on God. And this was not only Thursday, but also Friday and Saturday. 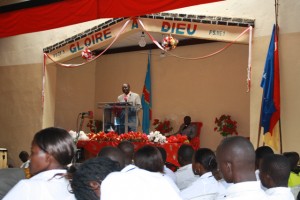 Sunday was the big church service in the stadium of Bunia. Many thousands of people came to hear the history of CECA 20, the choirs, the sermon and also Christine Shushu, a famous Tanzanian Gospel singer. It was a great service. 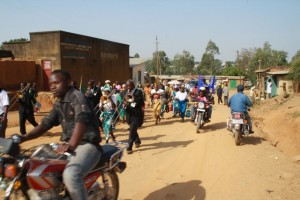 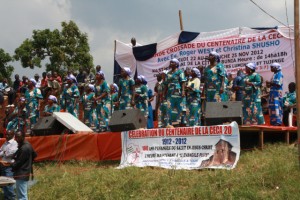 Tuesday November 27 the General Assembly of CECA started. I was appointed to be an observer, meaning that I could be there, talk and ask questions, but that I could not participate in the voting that would take place on Thursday. That day a new church president, vice-president and regional pastors would be chosen. Together with other observers we handed out the voting slips of paper, gathered them and counted the votes.

The voting was unanimous. Reverend Kokole Idring’i Jean-Pierre has been voted in for a third term in office. His vice-president will be Reverend Pilo Guna. A new team, and I am looking forward to the next four years to see how they will work together and work to build CECA and through CECA God’s Kingdom.

Rev. Kokole Idring’i was elected for a third term as church president of CECA 20

Rev. Pilo Guna was elected as the next vice president of CECA 20